Elizabeth Enders has captured a vision of the Milkweed through careful observation of an original specimen and an immediacy of painting style.  Her approach to extracting the plant’s form with a few powerfully painted lines, carries the full weight of its parts.  Her contemporary vision of a complicated plant, simplifies its very form to pure elegance.  As winter draws to a close, we reflect on this change through a stunning dried specimen and within her “winter blues” and greens. 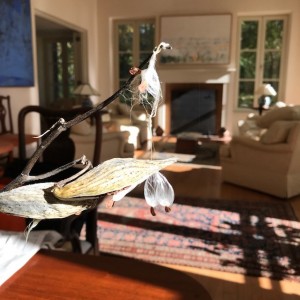 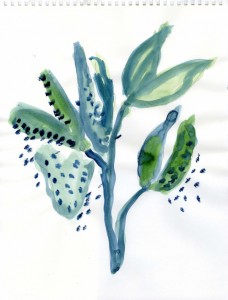 Winter is a time for introspection, appreciating the landscape lacking canopies of coverage.  Branches extend skyward with greater reach as new growth emerges pointing  toward Spring.  Recently I visited the Bruce Museum in Greenwich, CT to see Pressed for Time:  Botanical Collecting as Genteel Pastime or Scientific Pursuit?  running through March 3.  Concerning the hobby and profession of plant collecting at the turn of the 19th century, several collectors collections show the diverse purposes for gathering specimens.    Some plants were pressed to show plants for posterity as their owners were stewards preserving current plant-life (scientific), others tended toward the leisurely pursuits of walking through nature, plucking and pressing to enjoy the art of nature (respectable pastime).  It was a transporting story of a simpler time with a pure focus on nature.

Please enjoy Beverly Duncan’s Ashfield Compositions focusing on Winter.  Her piece depicts specimens found during the season in Ashfield, MA, nestled in the eastern foothills of  The Berkshires.  Historically an agrarian community, Duncan looks down during long walks, collecting specimens from nature first planted and cultivated in the 18th century. 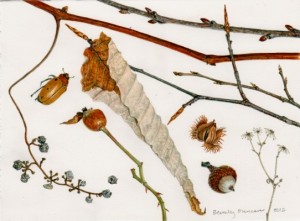 Connie Scanlon’s Blueberries tell a color story of formation of fruit through its pale green stage at first, onto reddish-purple hues during growth and dark purple when ripe.  Its wax coating offers a romantic haziness, an aesthetic impression and  distinctive characteristic.

Scanlon has painted this fruit numerous times, clearly mastering its form through her dry brush technique and the subtle crescendo of color allows us to gaze and ponder about something we usually consume with haste. 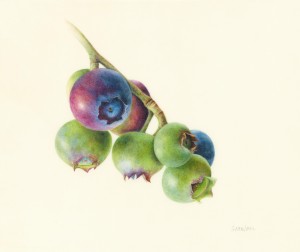 When I first landed eyes on Kelly Leahy Radding’s Pele’s Pincushion (ohi’a leu),  a painted plant portrait on dyed black goatskin vellum (below), the black background was a sharp reminder of the power that nature has over itself.  The plant can be found as 100ft tall trees in the rainforest or 1,000 year old bonsai trees in the mountain blogs.  ”The only stable characteristic of the plant is its pincushion-type flower.”  It is sacred to the volcano goddess Pele (who, according to legend, resides in the Kilauea Volcano) .  ”This plant not only survives, but thrives on the sulfur-filled air near the volcanic vents.”  (Amy Greenwell Garden Ethnobotanical Guide to Native Hawaiian Plants)  The black lava spewing out of Kilauea has erupted into our consciousness, our American landscape once again compromised by nature’s force.  Plants somehow find there way back into our vision, poking through as a reminder of rebirth.

Radding found the specimen at Limahuli Garden and Preserve on Kauai on the Northwest part of the island, part of the National Tropical Botanical Garden.  They were heavily damaged by the recent floods.  The only road out to that part of the island was swept away.  She says, “just another reminder that Mother Nature and Pele are the powers here, not us.

The elegance of this composition and strength of the background juxtaposed to the plant is mesmerizing.  Radding’s choice of the black ground is a striking resemblance to the current event and comments on nature’s theatre.  An incredible masterwork by one of the finest 20th century living botanical artists working today.  Should you be interested in acquiring this work, part of the proceeds will go towards helping those who lost their homes from Kilauea’s fury. 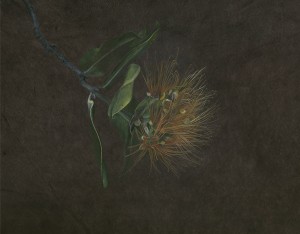 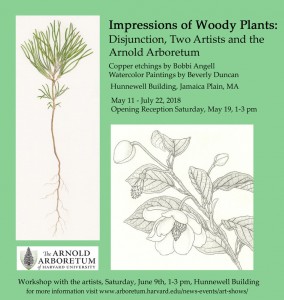 Spring arrived yesterday with the first natural signs of rebirth throughout the northeast. Karen Klugelin’s Ferrari Bulb and Beverly Duncan’s Spring Purples has inspired this quick note to enjoy this part of the nature’s cycle and offers us a glimpse of the beauty to come. 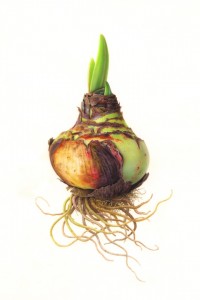 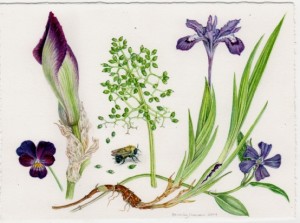 As we look forward to spring, here is a new work by Elizabeth Enders,
Anemone I, 2018.The spontaneity of drawing and use of negative space within the composition frees us to embrace fully the personality of the plant. 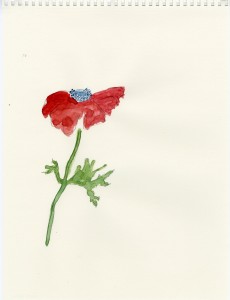 Curator Marilla Palmer has assembled a group of artists representing a range of ways art is used to study, celebrate and engage with nature.  As Markel’s Press Release continues to state, “Not only are they inspired by nature as a whole, specific elements of nature are brought into their studios to be photographed, rendered or used as raw materials.  This intimacy, admiration, and protectiveness of these pieces of nature is reflected in the work, whether through traditional drawings or contemporary abstraction.  Please click link below to read more on the exhibition.”

I am excited to announce the works of Beverly Duncan and Denise Walser-Kolar have been selected through my inventory for this show.  Duncan’s Ashfield Compositions, Spring Purples and Autumn Salmons and Walser-Kolar’s Hoefnagel-Inspired paintings #4 and #5.  I encourage all to visit the exhibition at Kathryn Markel’s Chelsea Gallery, 529 West 20th Street, Suite 6W. 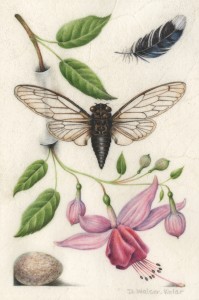 Nature before and after its Prime

The change of the seasons prods us to look within as the weather turns  and daylight fades.  It is with this introspection that I welcome you to contemplate two important paintings from my current inventory, Lara Call Gastinger’s End of Fall Sunflowers and Karen Kluglein’s Ferrari Hippeastrum, a red Amaryllis bulb.   As we admire both of these subjects in full bloom, we carefully consider their beauty in other stages of life.

Gastinger’s masterful dry brush watercolor technique and choice of sepia tone bring this specimen’s fragility to the forefront.  Her ability to capture the minuscule dried ray and disk florets and its hairy stem, while emphasizing its tilt, shows its dignity in the plant’s late stage.  Her graceful composition and the finely painted details points to her appreciation of nature, recognizing its past glory and telling us to take a second look at a time of year when most feel nature has less to offer, this artist begs to differ.

Kluglein’s Ferrari bulb shows the intricacies in the architectural details of its makeup.  She captures the layers as if we are walking up steps to a view a foreign land, moving around it with wonder.  She conveys the colors within it to hint at the expectant bloom (red Christmas Amaryllis).   We embrace it’s beauty before bloom through the clarity of brushstrokes and its luminosity in the translucency of vellum, realism personified.  A bold decision to celebrate a subject before it’s buried in the ground.

Pamela Lerner’s Home and Design Shop has a presence in the intimate one lane town of Bellport Village for nearly 14 years.  Susan Frei Nathan Fine Works on Paper first showed with PL H &D  in September of 2006, new to the town at that point Pam was cultivating a following with local homeowners and weekenders from New York and Brooklyn , outfitting their antique homes in the village.  Lerner’s aesthetic point of view with home goods, furniture and art informs her curatorial perspective, she stands out for her passion for objects and unique displays.  Outside she exhibits her garden furniture next to a floral design shop with live floral arrangements highlighting these one of kind pieces.  It is a privilege to share these botanical portraits with her clients and hope we can masterfully build interior gardens of plant portraits for her devoted patrons. 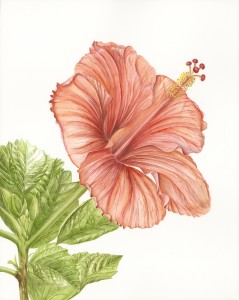 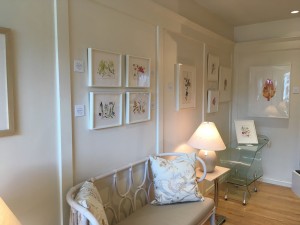